Types of headscarves seen around the world

Headscarves are one of the most recognizable types of head accessories in the world. In Islam, this signifies the covering up of the skin, known as aurat, or in Arabic as عورة‎, which derives as "defectiveness", "imperfection", "blemish" or "weakness" with the more common term in English known as “nakedness”. For Muslim women the covering of the aurat is compulsory in Islam as to prevent wandering stares from the opposite sex as well as protecting the woman’s dignity.

But some of these are considered taboo in some countries, particularly the negative perceptions it has towards how women are treated in Islam. While it is a common misconception, this is unfortunately a widespread issue, but nonetheless, it is still a popular form of head-wear that comes in many forms. It also shows how flexible Islam is as a religion.

Styles of headscarves are derived from many different backgrounds of cultures and ethnics, with some headscarves covering the face and whole body while others appear more lenient with the emphasis on aesthetics and some even come with garments to match. It is also a form of fashion in modern times, with headscarves of different designs paraded on runways around the world. Some look conventional while others are on the extreme side.

Here are the 5 different types of these sartorial hijabs/headscarves around the world. A group of Muslim women wearing niqabs, which are often confused with the burka (Photo ©ABC Australia)

One of the most recognizable headscarves in use is the Niqāb, which is synonymous with Middle Eastern countries such as Somalia, Syria, and Afghanistan and etc. where the Niqāb is most famous. Literally meaning in Arabic as نِقاب‎ or niqab , "veil", while also called a ruband.

Due to the wide variety of hijabs worn around the Muslim world, ambiguities emerge between the use of the Niqāb and Burqa which have similarities in looks and design. Both terms are commonly used interchangeably and mistakenly misconstrued. Niqāb covers the face while a Burqa covers the whole body from the top of the head to the ground.

There are many styles of Niqāb  worn by Muslim women around the world. The two most common forms are the half Niqāb and the gulf-style or full Niqāb.

The half Niqāb is a simple length of fabric with elastic or ties and is worn around the face. This garment typically leaves the eyes and part of the forehead visible. While the gulf-style or full Niqāb completely covers the face. It consists of an upper band that is tied around the forehead, together with a long wide piece of fabric which covers the face, leaving an opening for the eyes.

Left: half niqāb, Opposite: full niqāb

Jilbāb or jilbaab (Arabic: جلباب‎) refers to long and loose-fit coat or garment that covers the entire body, except for hands, face, and head with an extra visor for protection in the hot sun.

Common in African and Middle Eastern and Western Asian countries, this garment acts as both headcovering and a dress, it is a form of stylish wear for a woman that can be used in the public. One of the earliest examples of a moden day Jilbāb was exhibited by the wife of the first president of Turkey, Latife Uşaklıgil.

A new type of athletic jilbab has been developed by Nike. This allows women to play volleyball while still respecting a traditional clothing style, and avoiding the event of causing controversy. 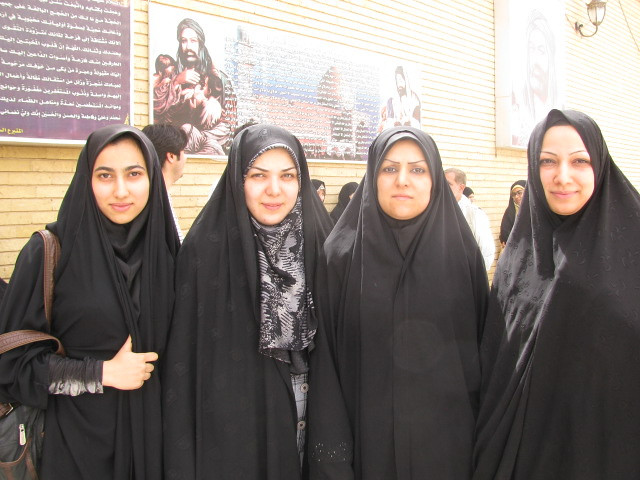 A group of women wearing the chador (Photo @Flickr by ihijab)

The Chādor or chādar is worn by many Iranian women and female teenagers in public spaces or outdoors.

The chador existed as early as 550BC along with the time of the Achaemenid Empire (also known as the First Persian Empire).

It is made up of a full-body-length semicircle of fabric that is open down the front which is tossed over the woman's or girl's head, but then she holds it closed in the front. It consists of a long, usually black or drab-colored cloth or veil that envelops the body from head to foot and covers all or part of the face.

In modern day times, the majority of women who wear the chador reserve the usage of light colored chadors for around the house or for prayers.

The Chādor is worn by some Iranian women regardless of whether they are Sunni or Shia, but is considered traditional to Persian Iranians with Iranians of other backgrounds wearing the Chādor or other traditional forms of attire.

The two separate varieties of hijab, From Left: 2 modern and 2 traditional variations

Particularly worn by some Muslim women beyond the age of puberty in the presence of adult males outside of their immediate family. It can further refer to any head, face, or body covering worn by Muslim women that conforms to a certain standard of modesty.

Hijab in Arabic literally means “a screen or curtain” and is used in the Qur'an to refer to a partition where The Qur'an tells the male believers (Muslims) to talk to the wives of Muhammad behind a curtain.

The Hijab is the most common form of headscarf and is generally an accepted form of headwear as it clearly shows the façade of a woman while at the same time protecting the modesty and dignity of the woman. However, this form of headscarf is not required for use in religious deeds such as prayers as telekungs or veils are used for that.

A Burqa is an enveloping outer garment worn by women in some Islamic traditions to cover their bodies when in public.

The face-veiling portion is usually a rectangular piece of semi-transparent cloth with its top edge attached to a portion of the head-scarf so that the veil hangs down covering the face and can be turned up if the woman wishes to reveal her face. In the Niqāb, the veil is attached by one side, and covers the face only below the eyes, allowing the eyes to be seen.

Burqa is an Arabized Persian word of purda (parda) meaning curtain and veil, which has the same meaning in Persian.

These are a few samples of many different types of head-wear and garments worn by Muslim women of many ethnics and races, with each having their own distinct features and designs as well as variations. It is a testament to the many cultures that have adopted head-ware as a form of covering of the skin, albeit to some extreme measures.

The acceptance of the ones listed above are varied from country to country. While some like the moderate Hijab are mostly welcomed in most parts of the world, others are restricted to just in the country of their origin, namely Burqas and Niqābs.

No matter what the varying views on the garments that feature headcovering, the popularity of head-wear and garments