When I looked down the memory lane, mesmerising all the sweet and bitter moments in life, I could easily felt the most gratitude towards my creator, Allah SWT, whom made my journey so interesting. How I’ve struggled, cried, laughed, trembled, overjoyed, loved, and tried so hard in every incidents occurred to me, I have learned so much. I would never regret with every single things and actions I made previously.

As I know, those things that happened, brought me where I am right now. I learned things the hard way. Meaning, I went through difficulties in life to finally turned me into a better woman. But one thing for sure, I do not change overnight.

I went through so many phases of improvements just to get me strive for the better and this reminded me not to feel comfortable at where I am every time. I’ve seen so many people out there trying to be judges punishing others who have not entirely change in becoming better Muslims yet.

Perhaps you don’t see this much pressure on normal people but you might come across those who are known publicly. A little change they made on themselves; e.g. started to wear headscarves but with tight clothes will be totally condemned and cynically ‘advised’ with harsh words. I just don’t agree with this kind of attitude.

I myself had drown in the so-called muslimah fashion world where wearing headscarf with tight clothes are norm to the society. But deep down inside I felt that I wanted to improve myself and slowly change my clothing piles. Changes happen when there is a little cry in the heart seeking for something to replace the old parts of ourselves. But a change requires a small or big trigger in us pushing to make the first move. Yes, that’s what it is – the first move.

When the first time I thought of covering my feet when I go out, I quite hesitated. Worried I might not be able to istiqomah or consistent in wearing socks but the determination to change has overcome my concern. There were people around you who would constantly checked on you, looking for any imperfection in you, just to pull you down. Although some meant to sincerely advise you, the words they choose might hurt you in many ways.

I have seen many public figures who donned the hijab at the first phase, received some irritating comments pushing them to change 360 degrees into an ustazah. Comments on the headscarves being too short, not wearing socks, no inner wear underneath their see-through headscarves, etc.; were given in blunt, negative contexts.

The person who is accepting these comments will eventually feel agitated because things they are slowly improving are still not enough in the eyes of the communities. 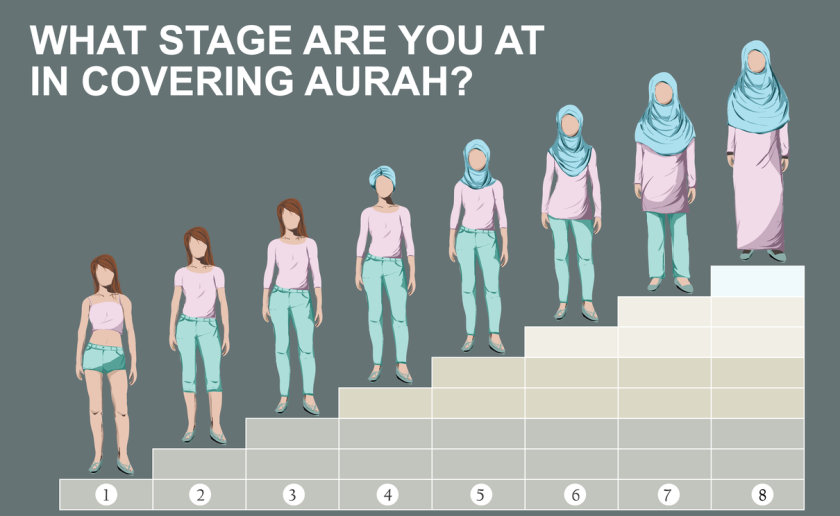 Giving advice is a form of da’wah. Apparently, da’wah has to be done with hikmah. You can’t be preaching about how ugly and horrendous the hell would be without revealing about the beautiful, alluring paradise. Getting others to perform good deeds requires proper da’wah invitation which comprises intellectual speaks and humble approach.

My husband used to debate with me about an Islamic topic but I just couldn’t accept his argument. In the end, he made me watch a video of a famous shaykh who explained in detail about the ibadah.

Alhamdulillah, with Allah’s decree, I accepted the fact with an open heart and thanked my husband for his method of da’wah – by using the video. I guessed not everyone able to absorb any form of preaching, thus we need to find suitable method to deliver our messages deliberately.

Rasulullah SAW said: “Whoever guides (another) to a good deed will get a reward similar to the one who performs it.” (Sahih Muslim)

I always emphasised on seeking beneficial knowledge through out our lives. These knowledge will guide and help us to improve ourselves as human beings, especially as the servants of Allah. Without knowledge we will tend to go against the teaching of Rasulullah SAW as we do not know which is right or wrong.

But there are others who have good knowledge but act arrogantly and quite conceited. With this attitude, they are keen to judge others who has not got better knowledge by giving inappropriate comments and hurtful thoughts.

Our words are du’a. Thus, speak or write with wisdom. Do not try to hurt others with our words even though we meant to give good advice. If we would like to give da’wah and corrected others’ faults, choose proper words and deliver them humbly. InshaAllah, Allah will make it easier for others to accept them.

Instead of saying, “Your hijab is not how a Muslim woman should wear!”

You can change it with, “MashaAllah, you look beautiful wearing hijab. I pray that you’ll continue learning about the hijab and may you always try to improve yourself wearing the full hijab.”

Be mindful that some people might struggle to change, they are probably starting at a very slow pace, but do not critic their effort. Show some respect and encourage them to keep going. We will never know the person we have been criticised before might be the one who is better than us in the akhirah. Allah knows best.