Muharram is the first month of the Islamic calendar. Muharram means “Forbidden”. Even before Islam,this month is considered as a sacred month whereby all unlawful acts were forbidden, prominently the shedding of blood.

(i)On this day he who spends more lavishly for the sake of his family members, Allah SWT will bestow blessing upon the sustenance of the following year.

(ii)Abu Qataada (R.A.) has related that the Prophet has reported to have said, “It is my thought that by fasting on the 10th of Muharram Allah SWT will pardon the sins of the past year”.

The Holy Prophet has said:

“The best fasts after the fasts of Ramadan are those of the month of Muharram.”

It is one of the four sanctified months about which the Quran says, “The number of the months according to Allah is twelve months (mentioned) in the Book of Allah on the day in which He created heavens and the earth. Among these (twelve months) there are four sanctified”. The Holy Prophet in his sermon on the occasion of his last Hajj, has declared:

“One year consists of twelve months, of which four are sanctified months, three of them are in sequence; Zulqadah, Zulhijjah, Muharram, and the fourth is Rajab.”

Although the month of Muharram is a sanctified month as a whole, yet, the 10th day of Muharram is the most sacred among all its days. The day is named Ashurah. According to the Holy companion Ibn Abbas,

The Holy Prophet , when migrated to Madinah, found that the Jews of Madinah used to fast on the 10th day of Muharram. They said that it was the day on which the Holy Prophet Musa and his followers crossed the Red Sea miraculously and the Pharaoh was drowned in its water. 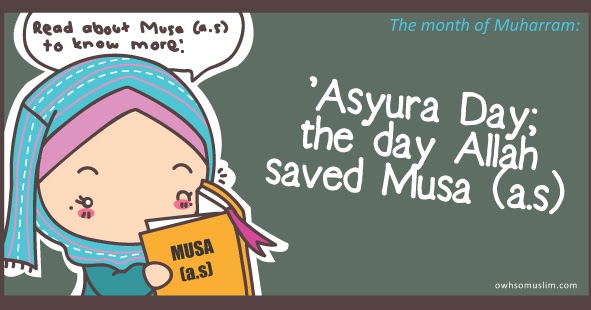 On hearing thisfrom the Jews, the Holy Prophet said, “We are more closely related to Musa than you” and directed the Muslims to fast on the day of Ashurah. (Abu Dawood)

“When the Holy Prophet came to Madinah, he fasted on the day of Ashurah and directed the people to fast it. But when the fasts of Ramadan were made obligatory, the obligation of fasting was confined to Ramadan and the obligatory nature of the fast of Ashurah was abandoned. One can fast on this day, if he so wills, or can avoid fasting, if he so wills.”

However, the Holy Prophet used to fast on the day of Ashurah even after the fasting in Ramadan was made obligatory.

In short, it is established through a number of authentic hadith that fasting on the day of Ashurah is Sunnah of the Holy Prophet and makes one entitled to a great reward.

The author, Sharifah Nursabrina, is a mom-preneur for an upcoming fashion brand, KAYAN and soon will be opening her dream cafe in Bangi area. KAYAN is a brand that specialises in wooden accessories. The brand creates the first Butang Baju Melayu Kayu in Malaysia. All local and hand made by her beloved husband. Besides the studs, KAYAN produces pin tudung kayu, kerongsang and customizes anything that's got to do with wood. All of these are made with love in their backyard. Alongside her business, she writes blog at https://beautifulmonkeylah.wordpress.com/author/sharifahnursabrina/ . She enjoys cooking, travelling and making new friends!